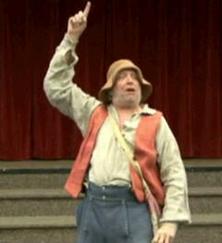 Because Hank incorporates the audience in every performance, each presentation molds itself to the unique interests of that particular group. Humor abounds. Each program is provocative, insightful, relevant, enlightening and entertaining. It’s art wearing a humanities tuxedo and a spinning bow tie.

Hank began his life of adventure first by serving in the Peace Corps in both Peru and Costa Rica. He later conducted research and gave live performances in twenty US states, Spain, Italy, Portugal, the Dominican Republic, Peru, and Ecuador. Each script took a minimum of two years to write and has been critiqued by scholars and theater professionals. Hank’s in-depth research assures historical accuracy. The crafted scripts, precise language, insights into both the past and the present, and skillful acting make the performances art. Hank has published more than twenty essays, a dozen short stories, and one book of children’s plays called "Three Midwest History Plays and Then Some."

The Indiana Arts Commission named Hank a Master Artist, and the Indiana Theatre Association gave him the “Teaching and Service Award.” He has the endorsement of numerous cultural institutions, including the Indiana and the Ohio Humanities Councils. For the past four years, Hank has received the national Pinnacle Award, based on the quality of his distance learning programs. To book Hank Fincken for your next group event, call 740-777-2579.

Watch Hank in a few of his many acts